Ujjayanta palace(Nuyungma in kokborok) is a museum and the former palace of the kingdom of tripura the palace is situated in Agartala. The palace was constructed during the year 1899 and 1901 AD build by Maharaja Radha Kishore Manikya Debbarma. The name of Ujjayanta palace was given by Nobel laureate Rabindranath Tagore. The palace has three domes each 86 feet high. A formal inauguration function was held on 25 September 2013 to mark the opening of the new museum by Hamid Ansari, the Vice president of India. It is northeast Indian’s largest museum.

The palace is largest of its kind in India and the only one in Northeast India. The palace is divided into two part. The western side of the palace is known as Andar Mahal. It was made for the royal family. The eastern side is an open-air theatre where drama, dance and other cultural programme were organized for the enjoyment of Maharajas and their royal families. The palace has 24 rooms in total, 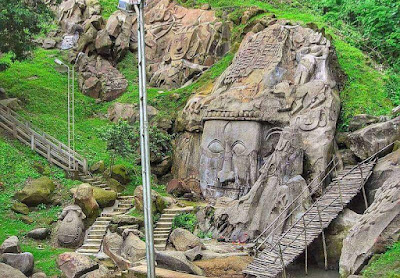 Unakoti literally means ‘One less than a crore’. According to Hindu mythology lor Shiva once spent a night here en route to kasha. H already said that before slept to his follower to wake up before sunrise and make their way towards Kashi,

But, no one awoke, except Lord Shiva himself. Before he set out to go for Kashi alone, h put a curse on her follower turning them to stone.

The kokborok name of Unakoti is Subrai Khung name given by Jamatia Hoda. The unakoti is situated at Kailashahar in Unakoti District, Tripura. At the Unakoti every year a big fair popularly known as Ashokastami Mela is held in the month of April. The festival is visited by thousands of pilgrims. Another smaller festival fair takes palace in January.

Tripureswari Temple is a Hindu temple of Kali Devi ( Goddness Tripura Sundari), ( Ama Ha Kwchar in Tripuri language). The temple is situated in city of Udaipur, 55 KM away from Agartala, Tripura. The temple was build by Maharaja Dhanya Manikya Bahadur in 1501 AD.

The temple is considered to be on of the 51 Shakti Peethas, legend says that the Shati little finger of the left leg feel here.

Shiv Bari (Mahadev Temple) Gunabati group of temple, the Mahadev Temple is situated  in the city of Udaipur in Tripura. The temple was build by Maharaja Dhanya Manikya. It is well known as Chaturdas Devta Mandir. Inside the temple is phallic symbol of Shiva is still worshiped. It has it has many temple inside and multiple Devtas Temple almost same design and same size.

An excavation by the Archaeological Survey of India is gradually brushing the dust off a 600 year old history of Tripura.

Tripura’s erstwhile royal palace Rajbari build between 1400 and 1432 during reign of king Maha Manikya at Rangamati. The present name is Udaipur rename by Maharaja Udai Manikya in 1571. 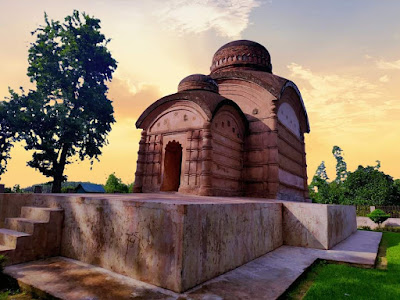 Bhubaneswari Temple is hindu temple located at Rajnagar in Udaipur, Tripura. Believed to be build in 1660-1675 AD, it is located next to the old Palace the temple was built by Maharaja Govinda Manikya.The temple has been immortalised by Nobel Laureate Rabindranath Tagore in his novel ‘Rajashri’ and Drama ‘Bisharjan’. 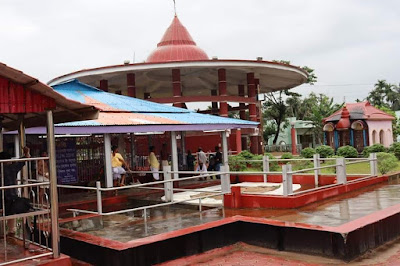 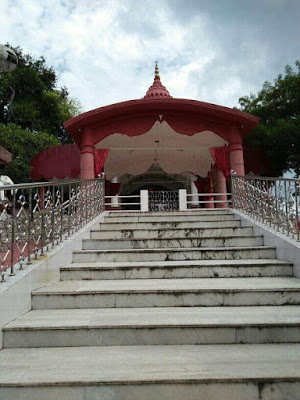 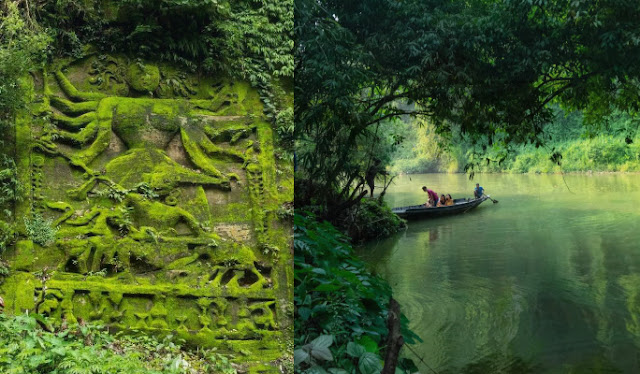 Chabimura also known as Chakwrakma is famous for its panels of rock carving on steep mountain wall on the bank of Gomati river. It’s situated at Hakwchak in Amarpur under Gomati district, Tripura. There are huge carved imang of god Shiva, god Bishnu, god Kartik, Mahisasura Mardini Gurga and others gods and godesses. The biggest idol of godess Maa Durga in rock carving is about 20 feet high. The carvings images date back to 15-16th century.